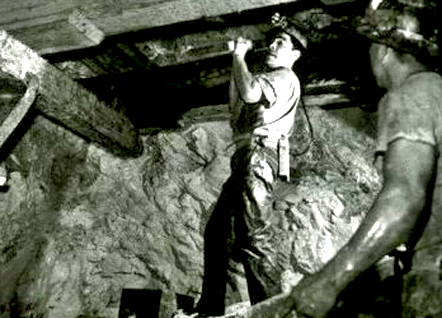 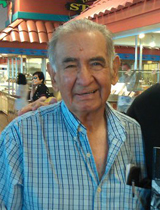 Author Onofre Tafoya has written several books about his experiences as an underground copper miner. (Image courtesy of Onofre Tafoya)

Tucson, Ariz. – When the San Manuel Mine northeast of Tucson closed in 1999, it was the largest underground copper mine in the U.S., with more than 2,000 people working in 350+ miles of tunnels and a nearby smelter.

The copper market had just gone bust, and instead of waiting for another boom, the San Manuel closed for good. A few years later, mine owner BHP Billiton flooded the tunnels and demolished the smelter stack.

But the mine lives on in the memories of many who worked there.

Listen to my interview with Onofre Tafoya, in which he recalls his days as an underground block cave miner:

Onofre Tafoya (he prefers “Taffy”) got a job at the San Manuel Mine as a young man in the 1950s. In those days, it was called the Magma Mine.

For the next 25 years, he did the hard and dangerous work of hauling ore to the surface.

He was a block-cave miner, spending all day far underground, working with massive machinery and raw muscle. 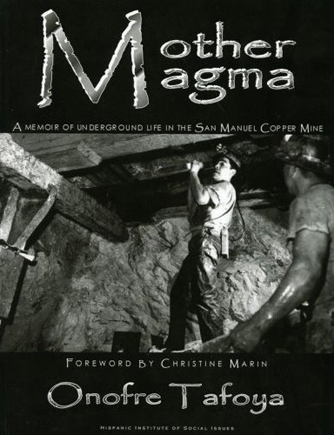 Onofre Tafoya’s book Mother Magma tells of his years working underground at the Magma Mine northeast of Tucson, Ariz.

Tafoya is still proud of his role in the Magma Mine. He becomes almost reverential as he recalls long days in hot, dusty shafts.

He is still amazed that men such as himself could literally move the earth.

The mine also played another role for Tafoya. It gave him the ability to support his family.

“Once I got a job at the San Manuel Mine,” Tafoya said, “my children never went to bed hungry.”

There was also a simple equality at the mine: The owners didn’t care about a man’s racial background, as long as he could put in a full day.

According to Tafoya, Hispanics, in particular, fared so well at the mine that it became “like your mother.”

Tafoya was an early fan of reading, but put aside academic pursuits when he joined the Navy. After that, he went to work to raise his children.

Now, Onofre Tafoya writes and travels. His books Mother Magma and Los Mineros tell of his days as a block-cave miner.

He lives in Mammoth, Ariz., ten miles from the former site of the Magma Mine. That’s where, he says with his voice choking with emotion, he “became a man.”