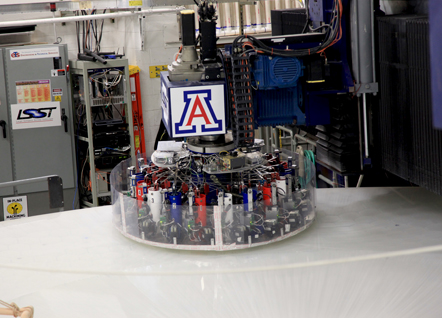 Tucson, Ariz. – A recipe for how to make a 8.4-meter telescope mirror:

Ingredient:
About 44,000 pounds of glass chunks. 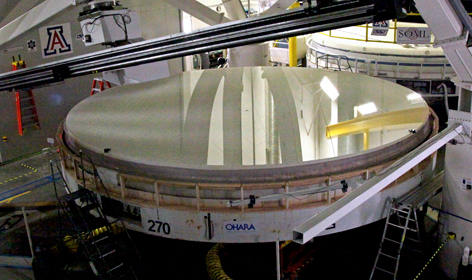 A highly polished telescope mirror. This segment, part of the Giant Magellan Telescope, is 8.4-meters, or 27-feet, in diameter.
(Photo by Mark Duggan)

The Steward Observatory Mirror Lab at the University of Arizona has been making some of the world’s largest – and most flawless – telescope mirrors for more than 20 years.

Scientists at the lab have perfected the math needed to consistently turn out mirrors that are almost perfect.

Mirror making is so specialized that the lab has even fabricated most of their own equipment.

Among the many mirror projects at the lab, the Giant Magellan Telescope is taking years to create. 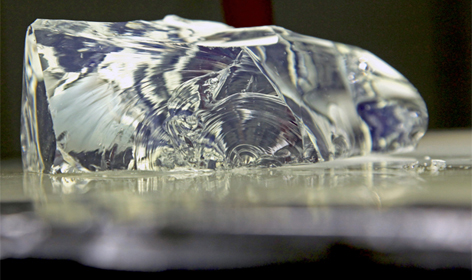 Raw glass from Japan, which will eventually be loaded into a mold, placed into a centrifuge and formed into a telescope mirror.
(Photo by Mark Duggan)

When complete, the GMT’s seven mirrors will be shipped to a remote Chilean mountaintop and installed in a honeycomb layout slightly off-axis from each other, creating a single optical surface 24.5 meters (80-feet) in diameter.

According to Roger Angel, founder and Scientific Director of the Mirror Lab, today’s telescopes can see only the brightest planets around distant stars.

“With the Giant Magellan Telescope, we should be able to see lots of them,” he said. “That’s completely made possible by the bigger aperture. It’s simply not possible with what we have now.”

The lab has built several other large mirror in recent years, including the 8.4-meter Large Synoptic Survey Telescope. The unique design, with two different slopes of concavity, has been the lab’s most ambitious single mirror project. The dual curvature of the surface creates both a primary and tertiary mirror on a single piece of glass.

The LSST will be a what’s known as a ‘wide-field survey’ telescope, taking snapshots of large areas of the night sky. Like the GMT, it will be on located on a mountaintop in Chile. 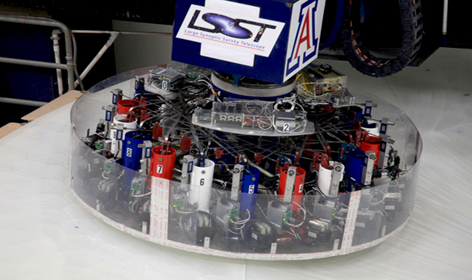 Jim Burge explained that the final polish is the most exacting process at the Mirror Lab. A computer-controlled polishing tool slowly wears the surface down.

“The key to making an accurate shape is to measure the shape you have and compare that to the ideal shape,” said Burge. “Then run the polishing tool to wear it down, until it gets closer and closer to perfect.”

Burge compared it to sanding a table, but with tolerances of only one-millionth of an inch. Anything more would alter the mirror’s shape enough to affect observations.

“For the telescope’s performance, it’s all about the surface,” Burge said. “The light reflects off a thin metal film that’s on top of a polished glass surface. The shape of that film has to be almost mathematically perfect.”

The Mirror Lab has furnished optics for some of the world’s largest telescopes, including the Large Binocular Telescope, Magellan I and II, the MMT Observatory, and the Vatican’s facility in eastern Arizona.

Their giant eyes have brought the distant reaches of the universe a bit closer.