A TV tale of “Badwater,” to be filmed in Montezuma County 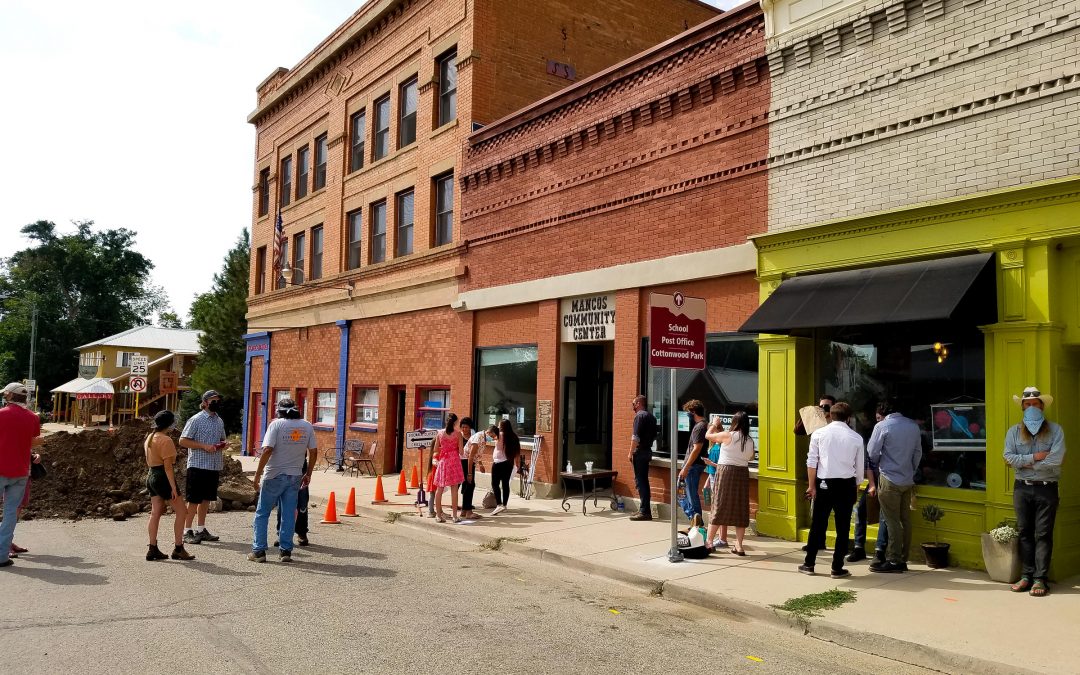 A large crowd of people recently attended a casting call in Mancos for a TV pilot that will be shot in Montezuma County.
(Photo by Mark Duggan)

Novelist Chuck Greaves, who lives southwest of Cortez, and director, Félix Enríquez Alcalá, a recent transplant to Mancos, both say they want to showcase the region’s diverse beauty in the show, called “Badwater.”

According to Greaves, the landscape plays a significant role in the plot. It also shines a spotlight on the region and could lead to future TV and film productions.

“We think it hasn’t really been seen by the outside world,” Greaves said. “From the red rock country in McElmo Canyon where I live to the open hayfields in the beautiful Mancos Valley where Félix lives and the forested hills around us. So many great settings present themselves.”

Scripted as an hourlong drama, Badwater will use the towns of Mancos, Cortez, and Dolores as a setting for a fictitious Western town. The plot follows a conflict between the town’s corrupt old guard and younger residents trying to expose them. There’s also a storyline about the relationship between Native Americans and the town’s white residents. Greaves, the author of books such as Church of the Graveyard Saints, wrote the screenplay.

Greaves and Alcalá are teaming up on the show when COVID-19 has upended many on-location TV productions. Some studios have halted work until next year. But Badwater allows the pair to shoot in their backyards, using cast and crew from the community.

“We have a chance to do something really special, in a special part of the world, with a bunch of special people who are anxious to work,” explained Alcalá, who has directed episodes of Breaking Bad, ER, and Madam Secretary. “That’s sort of a dream come true.”

The American Southwest has provided the backdrop for countless movies and TV shows. Some of the images are seared into the American consciousness, like the Mittens Buttes rock formations in Monument Valley, Arizona, and the craggy promontory of Dead Horse Point State Park near Moab, Utah.

Today, New Mexico is particularly successful at attracting film productions, thanks to tax credits to producers and promotion by the New Mexico Film Office. There’s been a recent push to make Colorado more attractive to the industry. Part of it is notoriety because, yes, it will be pretty cool to see Sleeping Ute Mountain and Mesa Verde in a TV show. But there’s also a financial incentive. Greaves estimated that a TV show production can pump up to $3 million per episode into local economies.

“We have a chance to do something really special, in a special part of the world, with a bunch of special people who are anxious to work.” – Director Félix Enríquez Alcalá

Production on the pilot for Badwater begins October 19 and will continue around Montezuma County for about two weeks. After that, Greaves and Alcalá will “shop it around” to networks such as NBC and streaming services like Netflix. If they bite and order an entire season, the pilot, and likely five more episodes, everything will be shot in Montezuma County.

Both Greaves and Alcalá concede that it will be challenging to pull off a TV production in the middle of a pandemic. According to Greaves, they will follow strict guidelines from SAG-AFTRA (Screen Actors Guild – American Federation of Television and Radio Artists) to keep cast and crew members safe while on location.

“We’ve contacted the hospital in Cortez,” adds Alcalá. “They have a testing facility, and they’ve been gracious with us. They’re going to help and do everything they can to get us tests overnight.”

Plenty of people are interested in being part of the cast and crew for Badwater. A casting call on August 18 in Mancos drew more than 250 people. Second auditions or “callbacks” are scheduled for early October, just before principal filming for the pilot episode begins.