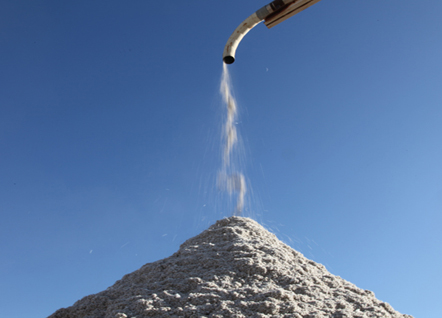 Buckeye, Ariz – When Arizona became a state in 1912, farmers were cultivating alfalfa, wheat, and vegetables. But cotton was particularly popular.

“The old cotton belt of the American South wasn’t suitable because it was too humid,” said Sheridan. “That’s when the major tire companies like Goodyear and Dunlop triggered a boom in long-staple cotton that was really astonishing.” 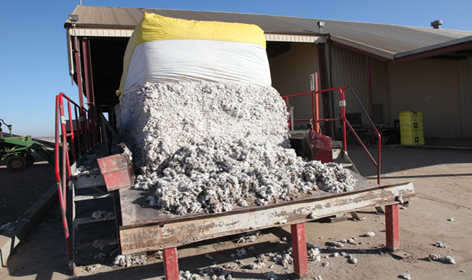 Raw cotton bales are ready to enter the ginning facility, where white fiber will be separated from the seed.
(Photo by Mark Duggan)

Cotton farmer Kevin Rogers, who oversees the Arizona Farm Bureau, admitted that farming acreage is down from historic highs. But production is up because prices are up.

“We’re going through a stretch right now where it’s a good time to be in the cotton business,” said Rogers. “We’re trying to find ways to sustain that as long as we can.”

Rogers has to be pragmatic. Cotton, like all commodities, goes through price swings. Playing it safe in the good times protects against the bad. That means putting off spending $500,000 on a new cotton picker.

“Some of us have been reluctant to jump out and buy the new machinery because the cotton market is up,” he admitted. “Because we know the cotton market is up now. But two years from now, it could be back down to 70 cents a pound, and you really need closer to 80 cents to break even. So those opportunities when the market’s up, you bank those for those years when it’s down.”

Third-generation cotton farmer Ron Rayner also manages a gin near Buckeye, Ariz. He pays attention to where his cotton goes. He can track a bale through every step of the distribution process. 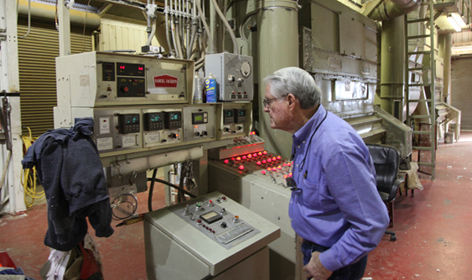 Cotton farmer Ron Rayner checks various readings from the gin, including temperature and airflow. Computers have changed how ginning is controlled and monitored, even though the physical process has remained mostly unchanged for more than 200 years.
(Photo by Mark Duggan)

Cotton farming, like everything else, has gone high-tech, even in the gin.

“The incoming moisture is about 6.4 percent,” said Rayner as he leaned in to inspect a bank of controls. “But it’s got an automatic feature, so it will adjust it.”

Rayner has finished this year’s cotton harvest and re-planted his fields with durum wheat. An irregular crop cycle lets him ride out some of the volatility of the cotton markets.

Today he’s at the gin, supervising the process where cotton lint is separated from the seed, cleaned, and pressed into bales for shipping to a textile mill.

His gin stays busy handling incoming cotton from area farms. The recent boom has been good for Rayner.

But the industry seems to be losing ground, partially from the loss of farmland to urban development. Rayner also admitted that it takes a lot to handle the demanding crop.

Cotton gins are closing, too, selling their equipment to underdeveloped countries or for scrap metal and putting a strain on the market.

“We’re seeing some facilities’ capabilities being taxed,” Rayner said. “Because all of a sudden, there’s an influx of cotton, and the processing capacity had shrunk quite a bit. Now, there’s going to be some delays in getting the cotton ginned because of the limits on harvest capacity.” 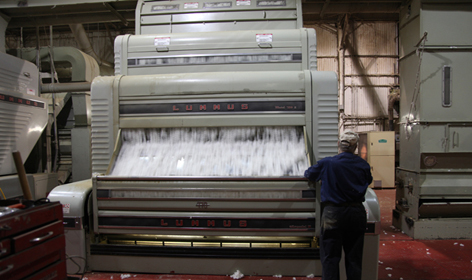 Rayner pointed out that cotton is still a vital part of Arizona’s economy.

“We have seven guys on each shift, plus the manager,” he said. “You can see the number of trucks and other things running around. It’s all part of the grand scheme of things that makes the economy grow.”

According to the Arizona Farm Bureau’s Kevin Rogers, the state’s agriculture is a $10 billion business, despite decreased production.

“Because thirty, forty years ago everybody’s grandpa did have a farm, technology has allowed us to produce more on less acres.”

But technology hasn’t made cotton easier to grow in a desert.

Kevin Rogers and Ron Rayner are sticking with cotton. It may be 80 percent of their crop one year and 30 percent the next, but they have the equipment and knowledge to ride out the market fluctuations.

Today, it’s booming and still a good way of life for some.

The fluffy, white material used to make everything from t-shirts and tires is still a big part of Arizona’s economy. 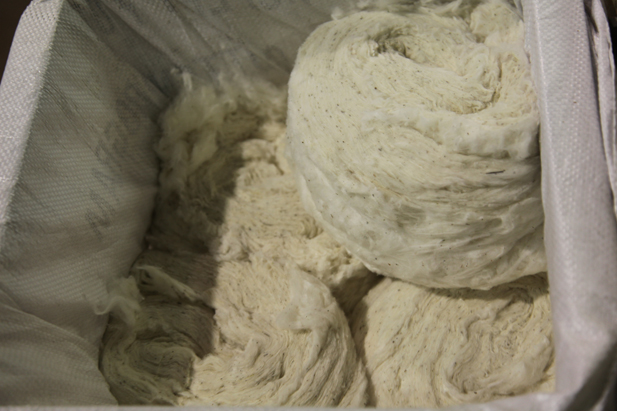