The book chronicles one day – June 16, 1904 – in the life of fictional Dublin resident Leopold Bloom.

More than just a narration of Bloom’s experiences, Ulysses takes the reader into his head. 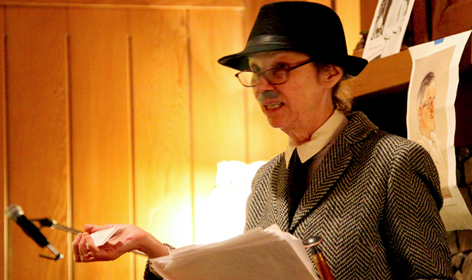 A James Joyce impersonator at the 2011 Tucson Bloomsday event.
(Photo by Mark Duggan)

The book can test even the most patient of readers. Many get no further than the first few chapters.

Ulysses has, however, taken on a second life as an oratory piece.

Diehard Joyce fans realized that the book’s language, and its author’s intention, are much easier to understand when it’s read aloud, preferably to a slightly boozy audience.

Each year on June 16, a day now known as Bloomsday, fans gather worldwide to take turns reading from the book.

The 2011 occasion in Tucson celebrated Joyce and other Irish contributions to literature.

Young Irish dancers high-stepped in the hall while a Joyce impersonator mingled with guests.

The crowd was mostly older, turning from rapt attention one moment to boisterous encouragement the next.

A well-thumbed copy of Ulysses sat on the podium. Some read directly from its pages, while others used it as an armrest to recite long passages from memory.

As the evening drew to a close, it came time to sing a few of the old Irish songs. Everyone knew the words by heart.

“Bloomsday: The History and Tradition” from the James Joyce Centre

More on Ulysses from Wikipedia