Separating truth from myth in the gunfight at the O.K. Corral 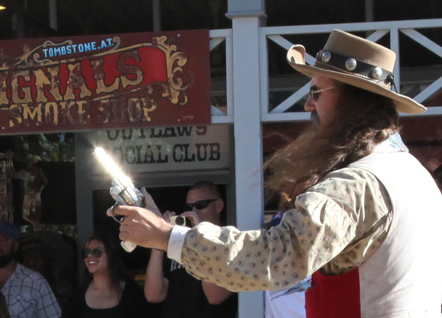 Tombstone, Ariz. – The Gunfight at the O.K. Corral is an American Myth. It’s a tale of a violent showdown in 1881 in a remote part of Arizona, and it’s long been immortalized in both history text and Hollywood script. 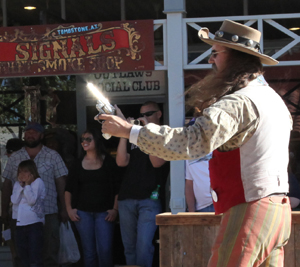 Just before the bullets fly.
(Photo by Mark Duggan)

Various cinematic and literary treatments of the gunfight story provide for us the image of a steely-eyed, mustachioed Wyatt Earp aiming his six-shooter at cattle rustlers.

The showdown is cast as a classic fight between Good and Evil, appropriately set in a violent, lawless frontier town where gunfights were commonplace.

But author Jeff Guinn says the truth is more complicated and interesting than the popularized Hollywood myth.

“They’re selling a very cartoony, black and white, good-guy, bad-guy version of what happened,” Guinn said. “It can be entertaining, but it doesn’t have a whole lot in common with the way Tombstone really was in 1881.”

Guinn’s book The Last Gunfight traces the feuds that led to the confrontation and its long-smoldering aftermath. The movies make it exciting, he said, but not realistic.

By studying historical documents, firsthand accounts of the battle, and Wyatt Earp’s diaries, Guinn concluded that the myths around the shootout helped create our idealized version of the West. 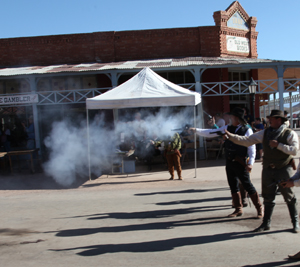 Guns roar, but they shoot blanks.
(Photo by Mark Duggan)

Tombstone’s current celebration of its past is proof of this, he argues, especially the staged shootouts.

But in 1881, Tombstone, Arizona, was one of the nation’s most sophisticated small cities.

Citizens were cosmopolitan by frontier standards, and they demanded law and order.

There were strict laws against carrying weapons in public. Gunplay of any kind was rare, and high-noon showdowns in the street were non-existent.

The Shootout at the O.K. Corral, according to Guinn, was not a grim showdown between opposing forces. An arrest went wrong and escalated into a ragged chase through Tombstone, with bullets flying and citizens cowering.

It was an isolated incident in a remote place. But it created a myth of the lawless, bloody West that endures today, even though it’s a highly stylized myth that mostly lives in Cormac McCarthy novels and Tombstone’s many gift shops.