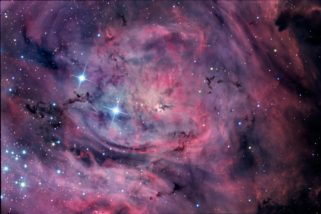 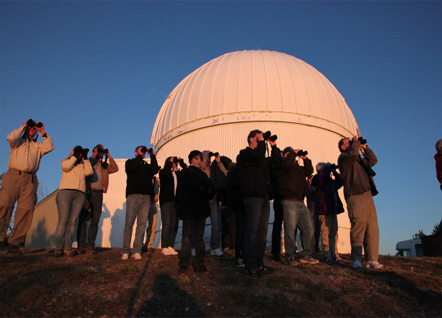 He shares them all with childlike enthusiasm, making him the perfect guide for the nightly viewing program at Kitt Peak National Observatory west of Tucson.

Several dozen astronomy tourists, as they’re sometimes called, join him on a presentation that begins at sunset and includes night sky viewing with binoculars and telescopes.

Cruz isn’t a professional astronomer but enough of an advanced amateur to be part of a small team of public viewing leaders at Kitt Peak.

His strategy is to be both informative and entertaining.

“You really have to use your imagination when you’re looking at most constellations,” he told a group of about a dozen one evening. “They hardly ever look like what they’re named after!”

Cruz started his program with a tutorial on locating objects in the night sky with a simple pair of binoculars. After taking a few questions, he led them outside to look for Jupiter. It was just before sunset, and the planet wasn’t yet visible to the naked eye. But with the binoculars, it cast a shining beacon through the fading solar haze.

Watch a video preview of the original five-part series
‘Collecting Light: An Exploration of Arizona Astronomy.’

Cruz smiled at the chorus of amazement that moved through the crowd.

“Oh, you can see the lines, even,” said one woman in a quiet, awed voice. 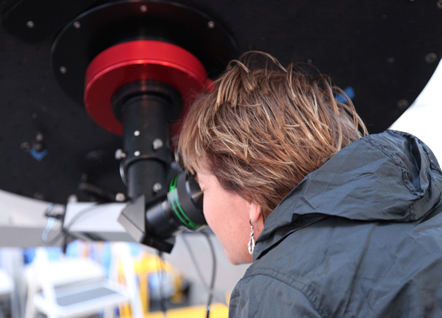 Looking through the Schulman Telescope at the Mt. Lemmon Sky Center near Tucson. (Photo by Mark Duggan)

As it got dark, Cruz led the group on a tour of nearby planets and stars. Later, they crowded into the dome of one of Kitt Peak’s many telescopes and took turns looking at more distant objects.

There was no shortage of quiet “oohs” and “wows.”

For many, it was their first experience using a professional telescope powerful enough to observe some of the detail of remote galaxies and star clusters. Their excitement was visible as they lined up at the eyepiece.

“I think the outreach activity and the public observing is one of the best tools that we have to remind the public that what we do is amazing,” said Beers.

Kitt Peak’s primary mission is research, which Beers admitted isn’t always easy to balance with the public’s fascination with stargazing. But as a National Observatory, the mission also includes cultivating popular science through public facilities.

Beers said it’s easy for the public to see “big science” in action with astronomy. Since its early years, the field has changed when only the wealthy could build telescopes and finance research.

Public outreach programs have put astronomy in the hands of everyday people.

“It’s the development of a national effort such as we have here,” said Beers, “that has democratized how we do astronomy.”

Most Arizona’s observatories offer public viewing programs, and many are booked months in advance. One popular program is the University of Arizona’s Mount Lemmon Sky Center, part of Steward Observatory. 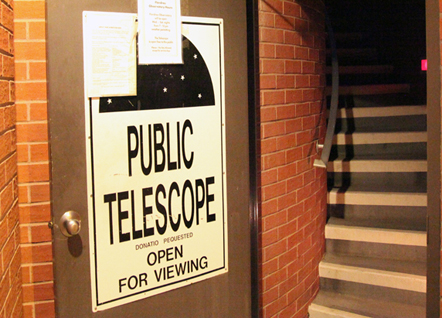 Public telescope viewing programs like the University of Arizona’s Flandrau Science Center have exploded in popularity. (Photo by Mark Duggan.)

Adam Block, who runs the program, graduated from the UA with degrees in astronomy and physics. He’s also had a lifelong fascination with the heavens.

“I always expressed an interest in the stars,” said Block. “The little dots up there always got me excited.”

“It was just me, and the stars, and the telescope,” he remembered.

Running a public outreach astronomy program lets him share some of what he missed as a child.

“One of the things that I always wanted to do was, as I looked through the telescope and found things, to turn around and show someone else.”

He gets to do it now. Adam Block guides astronomy tourists several times a week through a six-hour program that includes viewing through the Schulman Telescope.

The attendees are of all ages. But as they step to the Schulman’s eyepiece, even the adults become almost childlike. Everyone seems to return to a place of pure wonder and astonishment. People get quiet. The kids inform their parents that they want to become astronomers.

Looking up in wonder has never been more popular.