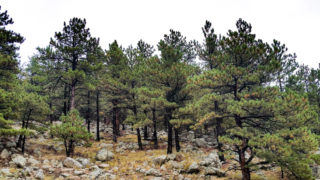 Boulder, Colo. – Colorado escaped significant wildfires this year, but millions of acres of forest in the state remain a powder keg, ripe for burning in the future. The next big fire could threaten thousands of homes. The U.S. Forest Service and other agencies can’t keep up, because there’s too much timber and not enough money.

It keeps Bret Gibson, chief of the Fourmile Fire Protection District, up at night. His district west of Boulder, Colorado, is overgrown with dense trees and brush and dotted with hundreds of houses. He was chief in 2010 when the Fourmile Canyon Fire destroyed more than 160 homes and burned 6,200 acres. He knows future fires could be much larger and more destructive. 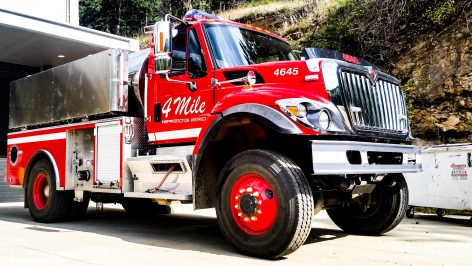 Standing on a slope above the fire station, Gibson pointed to a thinned forest area.

“You can tell that because the trees aren’t touching each other, and everything’s been ‘limbed’ up to six feet or so,” he said. “It just allows the forest to grow more healthily.”

A hundred feet away, it’s a much different story.

“The density of the forest gets thicker, almost triples in density,” said Gibson. “The branches extend pretty much to the ground. You literally have absolutely continuous fuels from the ground to the crown.”

“Fuels” is firefighter-speak for any forest vegetation dry enough to be flammable. Even small fires can quickly spread and threaten homes in a densely overgrown and dry forest. Thinning can help reduce the risk, but the danger can’t be eliminated.

Nor should it be, say fire ecologists. Forests need to burn periodically to clear out old growth. 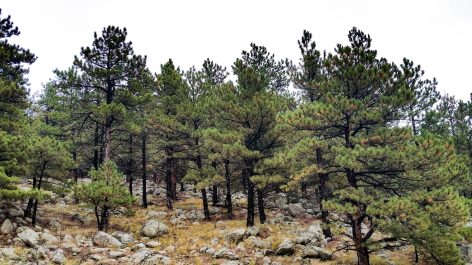 Trees crowd each other in an ‘unhealthy’ forest west of Boulder. A wildfire here could spread quickly under the right conditions. (Photo by Mark Duggan)

Jennifer Balch, who heads the University of Colorado’s Earthlab, says some smaller fires should be allowed to burn, especially if they pose no threat to homes.

“We can’t really address the amount of fuel that’s available with thinning and removing fuels alone,” she said in an interview with Science Friday. “We really do have to think about building better into these landscapes and living more sustainably with fire.”

Yet more thinning is on the minds of many fire managers and government officials. The U.S. Department of Agriculture, which oversees the Forest Service, aims to make more money available for fuel mitigation efforts by ending the practice of “fire borrowing.” That’s the term used when money meant for prevention programs such as thinning and prescribed burning is diverted to pay for fighting increasingly destructive wildfires.

A group of Senators from western states, including Colorado Democrat Michael Bennet and Republican Cory Gardner, support legislation to more than double suppression funding over the next decade and preserve prevention coffers.

Yet the Forest Service isn’t the only agency managing public lands. Many others — federal, state, and local — contend with the possibility of wildfire. And with little money to go around, the focus is always on thinning fuels from areas closest to human development. 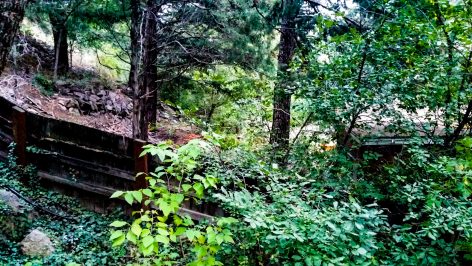 Dense overgrowth surrounds a home in Boulder Canyon. Fire managers try to get homeowners to cut back such vegetation and create what’s known as ‘defensible space’ around structures. (Photo by Mark Duggan)

In the Fourmile Fire Protection District, Gibson estimates that it costs about $2,000 per acre to clear hazardous fuels from a wooded area.

“If I could acquire $1 million, I could mitigate two districts and make that area significantly safer for the next 50 years,” Gibson said. “But if you do the math by what we do per year and how many (acres) are out there, we can’t keep up.”

He noted that logging and mining activity kept Colorado’s forests healthy a century ago. The tree density and undergrowth were low, and most fires were allowed to burn unless they directly threatened towns. That’s changed after years of effective fire-fighting.

“All the trees have been growing, as opposed to being cleared out seasonally by fire,” he said. “It’s not natural.”