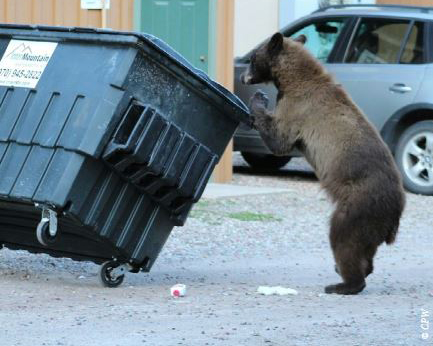 Boulder, Colo. – Colorado is home to more than 19,000 black bears, all focused on consuming thousands of pounds of calories a day as they prepare for their long winter’s sleep. That’s bringing them into more conflicts with humans, especially as they explore neighborhoods for trash and ripe fruit fallen from trees. Recently, bears have been spotted going from car to car in Aspen, trying door handles. They also broke into an Estes Park restaurant and raided the refrigerator.

According to Colorado Parks and Wildlife spokeswoman Lauren Truitt, her agency often logs as many as 100 bear calls per day every October. 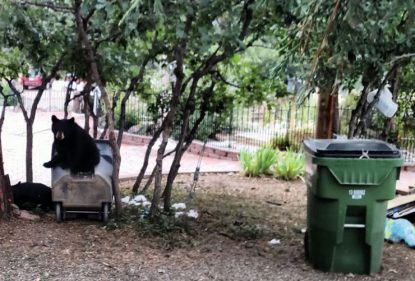 Black bears are easily able to access trash when cans are left unsecured. Bears are in their annual feeding frenzy ahead of hibernation, with many animals searching for food up to 20 hours a day. (Photo courtesy of Colorado Parks & Wildlife)

“Those can be from, ‘Hey, there’s a bear walking down my street,’” she explained, “to a more dangerous situation where we have to, in some cases, euthanize a bear.”

More than 130 animals have been put to death by state and federal agencies and landowners in Colorado this year. It isn’t a record number, but it’s higher than average. Bears are euthanized when considered ‘aggressive,’ which Pruitt defines as charging people, entering a house, or returning to an area from which they’ve been previously removed.

Part of the reason so many bears have been put down this year is because a critical food source is missing.

“In some areas of the state, we’re looking at food failures,” Pruitt said. “We had a late freeze in June, which we typically don’t see. What that did is it really hindered the acorn production this fall.”

Bears are omnivores and will eat almost anything, especially in their pre-hibernation rush of 20,000 calories a day. They prefer berries, grasses, and acorns, with a bit of protein on the side in the form of insects and newborn deer and elk.

But when one of those food sources goes away, they’ll seek out other forms of food to make up for the loss. If they live close to humans, that often means discarded kitchen scraps, usually found in an unsecured trash can.

“Because they have such high dietary needs,” said Pruitt, “human trash offers very easy access to a high-calorie meal. If you remember Winnie the Pooh and his love for honey, that’s kind of where our bears are this time of year.”

Their insatiable appetite often brings them into contact with humans, so they lose their natural fear of us. But it can also be dangerous for them. They can cut their tongues in their zeal to lick plastics, cans, and glass. They can also accidentally ingest cardboard containers, which can clog their digestive systems and starve them. 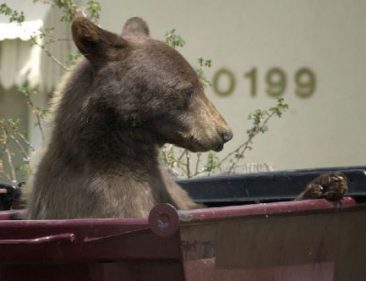 Black bears prefer to eat berries, grasses, acorns, insects, and an occasional newborn deer or elk. When one of those food sources is cut off, they often seek out unsecured trash cans. (Photo courtesy of Colorado Parks & Wildlife)

Wildlife biologists have also found that access to trash shortens their hibernation period because they’re enjoying the smorgasbord too much to sleep.

This throws off their natural body rhythm and can be detrimental to cubs born in the den during hibernation.

It involves giving the animals a dose of negative reinforcement: Encouraging property owners to use bear-resistant trash cans, making sure downed fruit is quickly removed, and installing electrified fencing to protect livestock and beehives.

“Our goal is to keep bears from coming into town,” Lee said. “And also, for the occasional bear that comes through town, to make sure it’s not too comfortable, so the bear does not want to stay. We don’t want them comfortable around us.”

Lee feels the Boulder Bear Coalition has an impact reducing human and bear conflicts, partially by educating citizens on making human territory unappealing and even scary to bears. She’s received calls from around the U.S. from people wanting to emulate her organization’s success.

“We can be leaders in showing that if we’re smart and taking the right steps, we’re protecting bears in the future,” said Lee, “and we don’t have to be relying on wildlife officers to come in and deal with a crisis.”

A bear-resistant trash can should be almost impossible for a hungry ursine to breach. It should even be hard for a human.

Boulder Canyon resident Zigy Kaluzny demonstrated this recently when he had to set a trash bag down to open the lid. 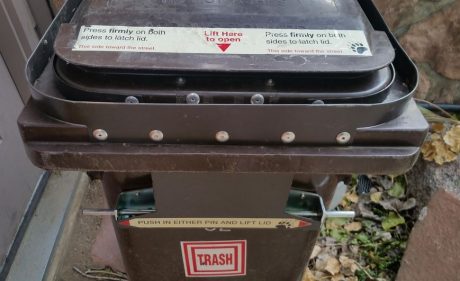 Organizations like the Boulder Bear Coalition try to get property owners to use bear-resistant trash cans. This one in Boulder Canyon requires two hands to unlatch the top. Users press each bar inward, then hold one and lift the lid. (Photo by Mark Duggan)

“It’s always a two-hand operation,” said Kaluzny as he dropped the bag into the can and firmly shut it.

He admitted that he only recently got a bear-resistant can. He used to keep his trash can locked in the garage, where it could get pretty stinky.

Kaluzny can count several interactions with bears during his time in the canyon, including recently, when he glanced up and found himself locking eyes with a large adult.

“The bear was about 20 feet from the back door,” recalls Kaluzny. “It reared up from all four paws just slightly and went ‘Huh! Huh!’ I huffed back at it, and it wandered off.”

He’s also heard bears wrestling with his trash can at night, trying to get at leftovers. They’re never successful and, after a few minutes, give up and move on.