Tucson, Ariz. – I became interested in exploring copper mining in Arizona when I saw several photographs of the Tucson skyline from the 1940s. The images showed a smoky haze hanging in the sky, completely obscuring the view of the Santa Catalina and Rincon Mountains.

The smoke was from several copper smelters, some 50 miles or more away, and it made Tucson look more like the industrial cities of the east.

Listen to the story, which details the history and economics of copper mining in Arizona:


Today, with all but one of the smelters closed, the air is clearer. But copper mining is still a significant part of Arizona’s economy. 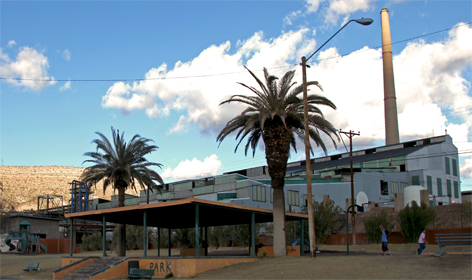 In smelting, freshly-mined ore is bathed in chemicals and roasted in a giant furnace, creating an unrefined form of copper.

For many people, smelting brings up images of grim concrete pillars belching black, oily smoke into the sky. The process creates sulfur dioxide, a known toxic, and it and other by-products are released through towering smokestacks.

U.S. officials clamped down on industrial emissions in the 1970s, pushing most smelter operations into countries with lax environmental laws, like Mexico.

Today, most of Arizona’s air quality problems come from dust, not industrial smoke.

But smelting isn’t completely dead in Arizona. Two of the three remaining operations in the U.S. are in mining company towns Miami and Hayden, both northeast of Tucson. 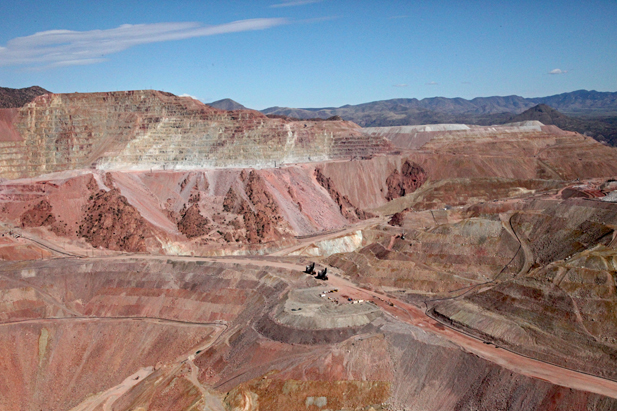 The Morenci Mine in eastern Arizona is one of the largest open pits in North America. (Image: Mark Duggan)

Copper mining continues to thrive in Arizona, but its importance to its economy is up for debate.

According to historian William Ascarza, who has written extensively on Arizona’s mining industry, copper’s importance stands undiminished, even in the face of multiple booms and busts and the growing high-tech sector.

“I’m firmly convinced that copper is what drives Arizona,” said Ascarza. “It employs many people throughout the state.”

That view isn’t shared by University of Arizona economist Marshall Vest, who said more modern industries have eclipsed the industry’s overall contribution to jobs and taxes. 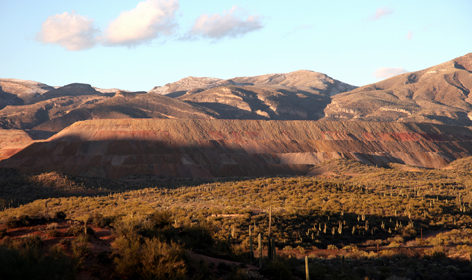 Tailings tower over the desert at the Hayden Mine in Arizona. (Photo by Mark Duggan.)

Arizona: Ground zero for copper mining for more than a century.

The first underground mines appeared in the Arizona Territory in the late 1880s. Spanish explorers had tried to mine copper before that but with little success. The real boom arrived with the railroad, making it easy to ship copper from mines in Ajo, Bisbee, and Morenci to newly emerging worldwide markets.

For more than a century, the state has enjoyed the booms and busts of the copper market. Mines have opened, prospered, and failed, sometimes in just months. Companies fat with fortune one year sank into insolvency the next.

But the worldwide demand for copper continues.

Our modern, high-tech life essentially runs on copper. There are hundreds of pounds of it in almost every building in the world. At least 50 pounds of copper are in every vehicle. It connects our electrical grid, our information networks, our telecommunications systems.

Humanity runs on copper. We discovered how useful it was about 11,000 years ago. It’s called “The Miracle Metal” by some people.