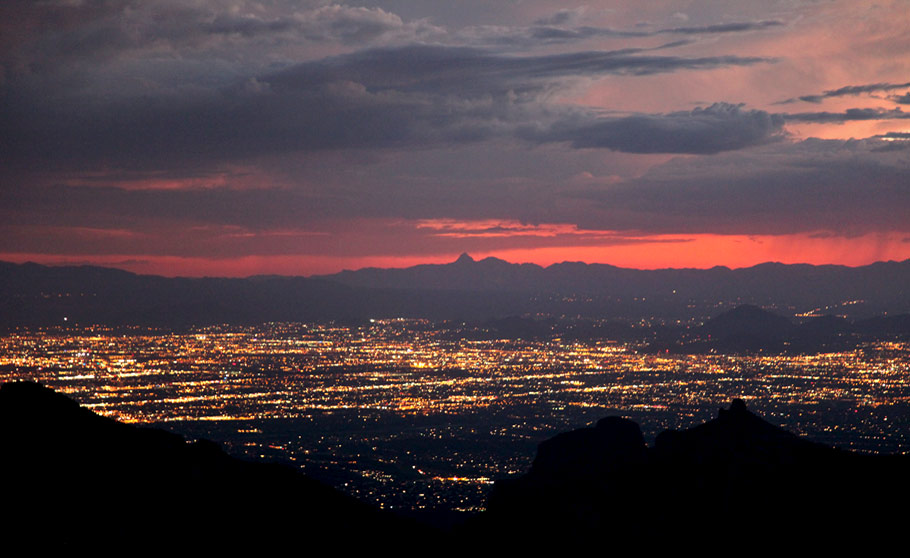 Arizona became an astronomy hub a century ago because of its clear, dark skies. Settlements were small, remote mountaintops plentiful, and clouds rare. Even today, the state gets up to nine months a year of near-perfect conditions for night sky observations.

In part four of Collecting Light: An Exploration of Arizona Astronomy, we look at efforts to preserve Arizona’s dark skies, even as light pollution from the state’s metropolitan areas expands into even the most remote areas.

Today, rapid population growth in Phoenix and Tucson is blotting out the darkness. “Light domes” over both metro areas now affect telescopes more than 100 miles away.

In response, astronomers have begun building the next generation of large telescopes in Chile.

The Atacama Desert, high-elevation and primarily uninhabited, provides the same viewing conditions today as Arizona did a century ago. It’s rarely disturbed by inclement weather and is considered one of the driest places on earth.

And from a scientific perspective, it also lets astronomers make detailed observations from the Southern Hemisphere.

While Phoenix and Tucson continue to boom, creating more light pollution, another city moves in the opposite direction. Flagstaff was one of the first certified “International Dark Sky” cities, which is remarkable considering its community of about 70,000 people. But Flagstaff enacted specific lighting ordinances to protect area observatories. The sky over the northern Arizona city lacks the light dome that similar-sized cities project skyward.

But it’s sometimes an uphill battle, as some communities resist efforts to reduce lighting out of safety concerns. And making the argument that light pollution makes it harder for astronomers to see a galaxy billions of light-years away can be a tough sell.