Looking back on Teddy Roosevelt’s history in western Colorado 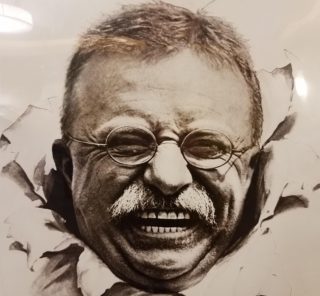 The nation’s 26th president hunted in the Divide Creek area and stayed at the Hotel Colorado in Glenwood Springs. He stayed at the hotel at least twice, and some people still refer to it, only half-seriously, as “the Western White House.”

He even negotiated a major peace treaty between Russia and Japan while staying at a cold, muddy hunting camp high in the Divide Creek drainage south of Rifle.

Roosevelt made such an impression on Rifle residents that a local church commissioned a stained glass window in his honor. Today, it’s on display at the Rifle Public Library. (See photo below.)

That’s where Andrew Gulliford, Professor of History at Fort Lewis College, recently delivered a talk on Roosevelt’s adventures in the area.

KDNK’s Mark Duggan caught up with Gulliford to talk about TR’s legacy, almost 100 years after Roosevelt passed away.