Old economies vs. new in ‘The Global West’

Tucson, Ariz. – The American West is littered with small towns that staked their fortunes on the fragility of natural resource extraction.

Mining towns prospered during energy booms. Many residents had high-paying jobs, and the local businesses profited handsomely. High tax bases led cities to build parks and other amenities. But when the busts came, most mineworkers moved on in search of new claims.

Superior, Ariz., which saw its population swell during the good times, bled residents and businesses during downturns. The central business district became a ghost town while remaining merchants clustered along US-60 to sell gas and food. Their customers were more travelers than townspeople.

Hayden and Morenci, Ariz., both “company” towns, weathered the bust by being yoked to some of the largest open-pit mines in North America. The Ray and Morenci Mines reduced production during successive busts but managed to stay open.

Listen to an interview with Jonathan Thompson of High Country News about the boom-and-bust cycles that govern the natural resource extraction industry and nearby towns. Thompson also discusses how most of the money and materials from hard-rock mining now leaves the United States:


Some towns found new life in tourism and morphed into vacation destinations. Bisbee, Ariz. and Silver City, N.M. even found a way to make mining history a part of the attraction and were soon filled with t-shirt shops, galleries, and arts festivals. 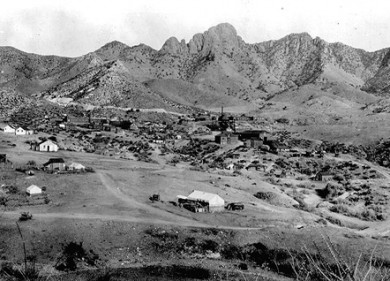 The town of Helvetia in the Santa Rita Mountains of southern Arizona in 1909. Four mines, including the Heavy Weight, Copper World, and Leader operated in the area. Nothing remains of the town today, but a company is proposing to build a new open-pit copper mine in the area. (Photo: Arizona History Museum)

The new service industry jobs didn’t pay as well as hard rock mining, but the people who took them tended to put down roots, unlike the often-transient energy workers.

But the tourism boom was often subject to its boom-and-bust cycles, particularly when a national economic recession would slow tourism. Some towns with one foot left in the energy sector would ride a new natural resource rush.

The sudden transitions between new and old West economies haven’t been easy for places forced to become service-industry towns after the last energy bust.

Some wonder if the latest boom will have only a short-term benefit, especially for mining communities.

According to Jonathan Thompson, contributing writer for High Country News, both profits and resources leave the U.S.

“Look at the mining industry in the West,” he said. “It’s mostly dominated by Canadian, British and Australian companies.”

The copper goes to China, as Thompson explains in his High Country News article The Global West. Their appetite is fueling the most significant energy boom in history.

It could also lead to the biggest bust. 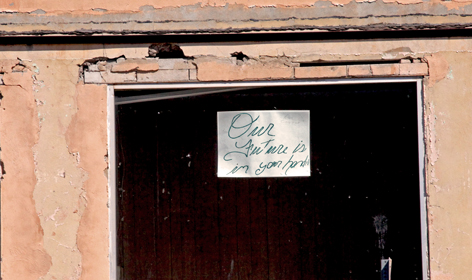 A sign in a deserted shop window in downtown Superior, Ariz., reads, “Our future is in your hands.” Resolution Copper proposes building an underground mine about 10 miles east of town. Supporters say Superior needs high-paying jobs. Opponents worry that an eventual bust will wipe out any economic gains the mine may bring. Many of downtown Superior’s merchants closed after the last bust.
(Photo by Mark Duggan)

“They said ‘we’ve seen the boom and bust cycle, and we don’t like it. We think we can do more sustainable stuff without the mine’.”

The Resolution proposal has many supporters who say the town needs high-paying jobs. But Superior didn’t withstand the last energy bust. When the mines closed, so did much of downtown. Today, the boarded-up storefronts reveal a place that couldn’t remake itself as a tourist destination.

Thompson predicted that most currently proposed mining projects will be approved unless another energy bust comes along. Resurgent mining and old economy industries enjoy enormous political power at statehouses and Washington D.C.

“The people who are trying to regulate mining used to have a lot more power because they could say ‘there’s an economic case to be made. If you build a big mine, it might dampen the housing industry’,” Thompson said.

The mines are run out of Vancouver and Sydney. So, according to Thompson, that political clout is falling into foreign hands. 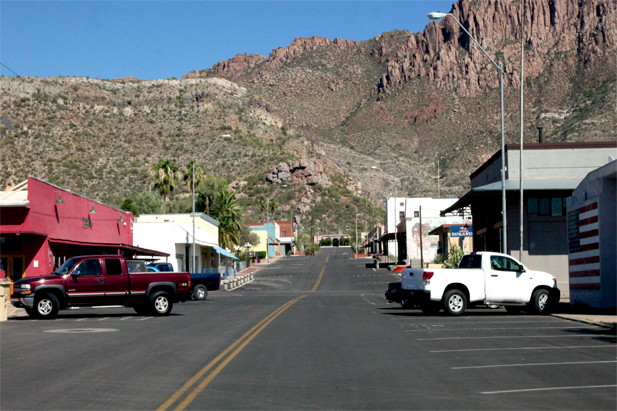 Downtown Superior, Ariz., on a weekday afternoon. A few businesses remain, including a bank, but most have been closed since the last energy market bust. Superior is a mining town that’s been unable to remake itself as a destination for tourism.
(Photo by Mark Duggan)