A photographic essay by Mark Duggan.

On August 5, 2015, the toxic secrets of The Gold King Mine high in the San Juan Mountains of Colorado spilled forth when workers breached a plug containing mine wastes. Three million gallons of heavy metals-laden wastewater spilled into area watersheds and flowed through downstream towns.

I lived about three blocks from the Animas when it happened.

Click on an image below to see a closer view. 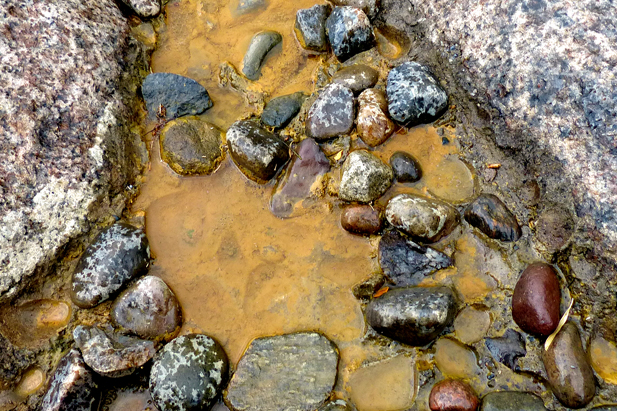 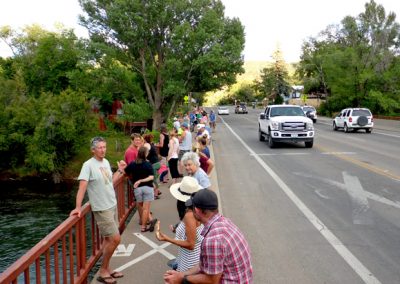 Crowds gather on the 32nd Street bridge in Durango, awaiting the arrival of heavy metals-laden wastewater. It would arrive at the bridge hours later, in the middle of the night. 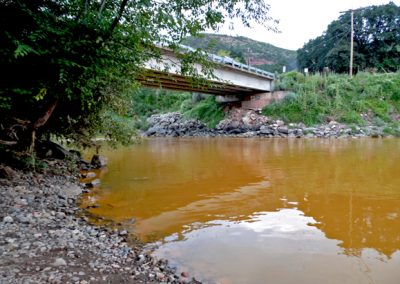 Mine wastewater reaches Trimble Crossing north of Durango on the evening of August 6, 2015, more than 24 hours after the mine blowout. 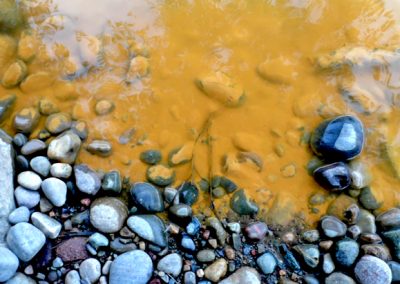 Orange sludge clings to the river bottom at Trimble Crossing north of Durango, the night after the mine leaked 3 million gallons of wastewater into the Animas watershed. 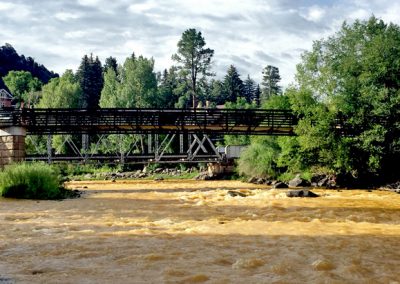 By the morning of August 7, the Animas River in central Durango was a bright orange, the result of heavy metals in the mine wastewater. (Photo courtesy of Stasia Lanier) 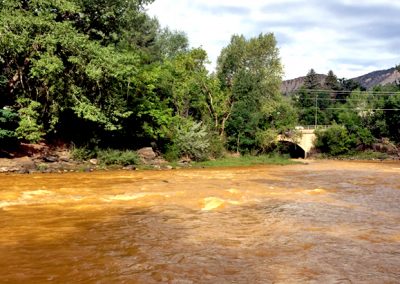 Durango residents saw a normal-colored river at sundown on August 6, by the morning of the 7th, it looked like this. (Photo courtesy of Stasia Lanier) 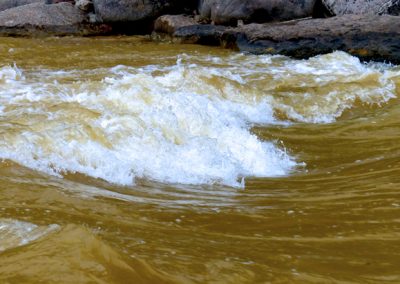 Nobody ran the rapids of the Animas for a few days. 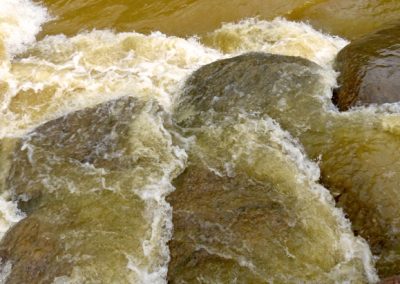 The Animas River, carrying three million gallons of mine wastewater, tumbles over rocks in downtown Durango. 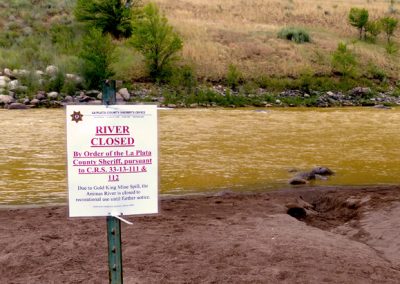 Health officials banned people from getting in the water as they assessed the risk from mine spill runoff. The Animas would stay closed for more than a week. 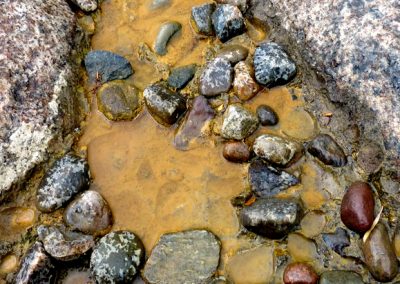 Gunk on the Rocks

Shallow pools and falling water levels created many orange sludge pools along the banks of the river. 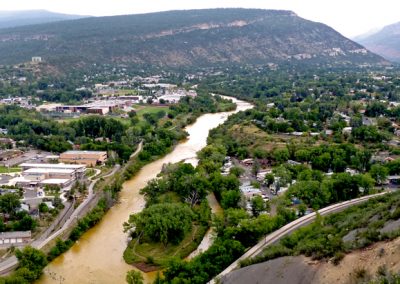 The Animas River, off-limits to human use as the orange wastewater passed, has a long history of carrying pollution from abandoned upstream mines. 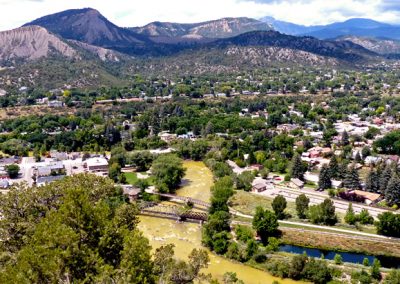 The river gradually changed from orange to green, before finally clearing more than a week after the mine spill. The Gold King Mine is about 60 miles north of Durango. 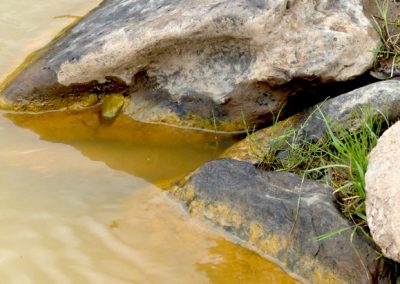 Rocks along the banks of the river are coated in an orange muck. It would take several weeks, and a few good rains, to wash it away. 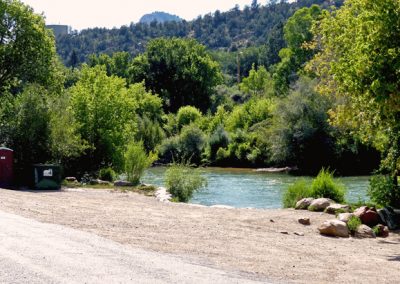 The 32nd Street boat launch parking area is usually packed in August. This was nearly a week into the river being closed to all human use. 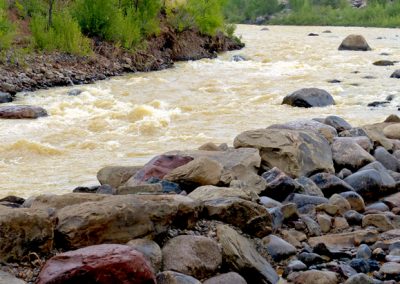 The whitewater Park, normally bustling with rafters and kayakers in August, is deserted just days after the river was closed to human access. 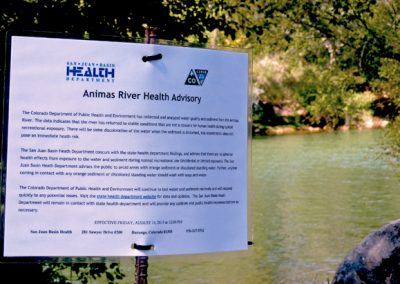 The county health department was clear about the risks of getting into the river as the wastewater passed. 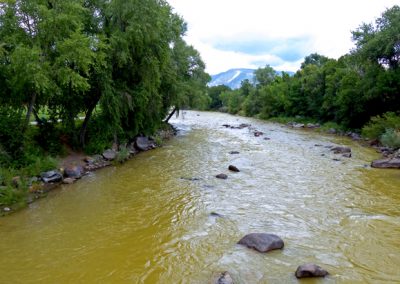 The orange tint had turned green a few days after the mine spill, but it took more than a week for the water to clear and return to a normal color. 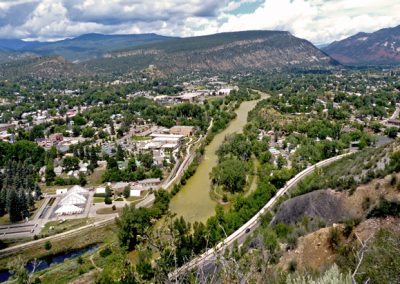 The Animas River flows through Durango one week after a mine blowout sent more than 3 million gallons of wastewater downstream. 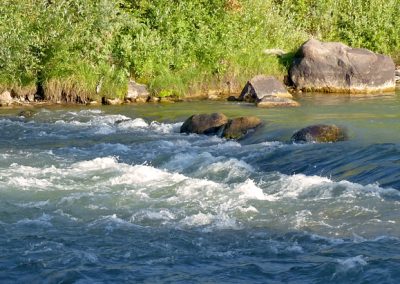 The Animas was declared safe for human use nine days after the mine spill. Here’s the river just hours after the closure was lifted. It took awhile for many people to venture back in. 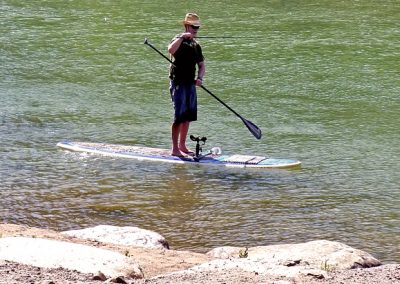 A man rides a stand-up paddleboard on the Animas, hours after health officials re-opened the river to human use. The only person I saw on the river that day. 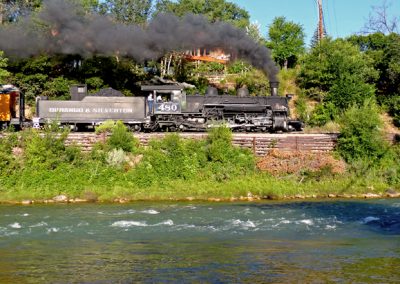 Durango has a complicated legacy of pollution: smelters lined the river banks just 40 years ago, and the river has long carried wastes from upstream mines. And then there’s the train smoke…