Re-enacting the Civil War in the Southwest

Picacho Pass, Ariz. – On April 15, 1862, two small groups of Union and Confederate soldiers fought a battle in central Arizona. The engagement left several Union troops dead, including the detachment’s commanding officer, and wounded several men on each side.

It was the western-most engagement in the Civil War, though some refer to it as only a minor skirmish. It’s significant enough, though, that it’s memorialized every year by a dedicated group of historical reenactors. They camp in canvas tents at Picacho Peak State Park, don anachronistic clothing, and re-live The Battle of Picacho Pass with rifle, musket, and cannon. In the evening, they gather around the bonfire for tall tales, bottles of sarsaparilla, and Dutch oven cooking.

They staged the 150th anniversary of The Battle of Picacho Pass in 2012, along with two other noted western engagements, Glorieta Pass and Valverde. 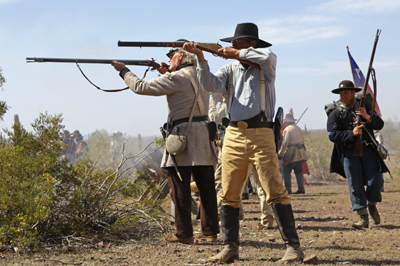 “Reach out and touch them!” With musket balls.
(Photo by Mark Duggan)

Spectator attendance was about a thousand that year. They arrayed themselves across a hillside, some even taking to lawn chairs. Others stood with binoculars, intently glassing the more distant reaches of the battlefield, trying to spot hidden artillery.

The cannons belched in shuddering waves. Gut-thumping reports echoed from the rocky spire of Picacho Peak. It was the sound of 12-pound Mountain Howitzers, field artillery pieces commonly used in the war’s western and prairie campaigns.

Moments later, in a ringing half-silence, a lone soldier put a bugle to his lips and played a particularly mournful version of Taps. The notes decayed in the desert breeze. The crowd was somber.

But it was all an act. The P.A. announcer gave it away:

“We honor our dead,” he intoned.

The dead suddenly rose and dusted themselves off.

“Resurrection, gentlemen,” the announcer added to great applause. “Let’s give them a big hand. The battle is concluded.”

It was the reenactment of the Battle of Glorieta Pass, which happened near Santa Fe, NM, March 26-28, 1862.

The 2012 reenactment at Picacho also included mock battles, cavalry and artillery demonstrations, a theatrical troupe, and a sutler’s row.

The reenactors also opened their orderly encampment to spectators, who got a glimpse of what life was like when a canvas ‘A-style’ tent was home. 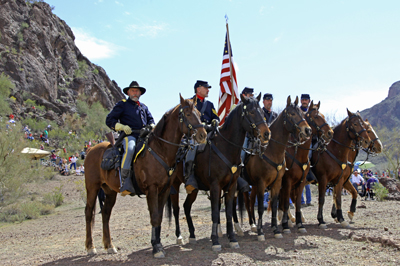 The cavalry has arrived. Hard stares and horseflesh.
(Photo by Mark Duggan)

A walk through the encampment is like being transported back in time. Dutch ovens bubbled, children chased each other around the fire, and there was no trace of cell phones and other technology.

Spectators who visited the camps were spellbound.

They marveled over tin dinner plates and asked delicate questions about the practicalities of hoop skirts, commonly worn by women in the Civil War era and widely seen at reenactments.

At the sutler’s row, they sipped iced root beer, tried on moccasins, and sized up muskets.

I found Barry Schrock cleaning his rifle outside his tent. The Las Vegas man was cast as a Union soldier in one battle and a Confederate in another.

According to Schrock, there’s no special training to become a Civil War reenactor.

“Tag along with a friend, or just walk through,” he explained. “We usually have a spare coat and hat, and we’ll get you out there for ten to fifteen minutes of interesting stuff.”

The duds are easy to find, usually from the sutlers found at most battle reenactments.

“Several of them will sell you authentic clothing from the time period,” said Schrock.

“To be period-authentic,” Schrock said solemnly, as he pointed to his outfit, “I have not washed these yet.”

Schrock wondered what mock Civil War battles look like to spectators. His role in the Glorieta reenactment was to fall dead early in the battle. To maintain authenticity, he couldn’t lift his head and watch the action. 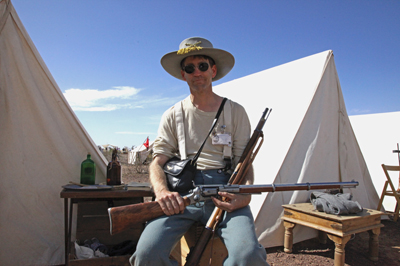 Some historians say The Battle of Picacho Pass wasn’t a battle. They call it a “skirmish” or just an “engagement.”

On April 15, 1862, a Union detachment of the 1st California Cavalry decided to investigate rumors of Confederate soldiers near Picacho Peak, about 50 miles northwest of Tucson.

They encountered them in a low pass between the peak and the Picacho Mountains. The Confederates, from what was then called the Arizona Battalion out of Tucson, laid down heavy fire.

Ninety minutes later, three Union men were dead and several others wounded. Losses on the Confederate side have always been unconfirmed, though the Union took three men prisoner.

Despite the talk of “minor skirmish,” The Battle of Picacho Pass looms large some, including the reenactors.

“The battle of Picacho Pass may have been only a skirmish compared to the great conflagrations in the east. But to the men killed and wounded there, it was the Civil War.” 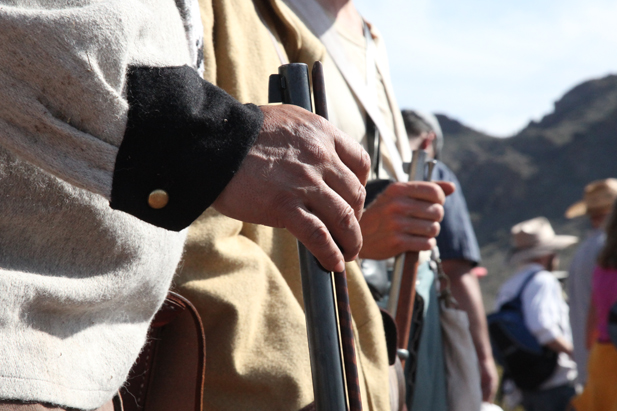 Back at the mock battlefield in 2012, the crowd had grown still. The cavalry had arrived in a rush of hard stares and horseflesh.

The Battle of Picacho Pass was fought entirely on foot and horseback, but the crowd still jumped when the first musket shots pierced the air.

A Union soldier on a towering horse convulsed, went limp, and collapsed carefully on the ground.

For a moment that day, the grown men on the battlefield seemed almost like children at play.

They aimed and re-loaded and fired and finally pirouetted bug-eyed and gasping to the desert floor, clawing at imaginary corruptions of the flesh.

A few hours later, with the battle over and the spectators gone, the reenactors relaxed by a large fire and started singing a few bawdy songs. A bottle of what was claimed to be sarsaparilla was passed around.

Then came the stories: Boastful tales of glory and bravery in battle, punctuated by great gales of laughter, as they reenacted the reenactment of The Battle of Picacho Pass. 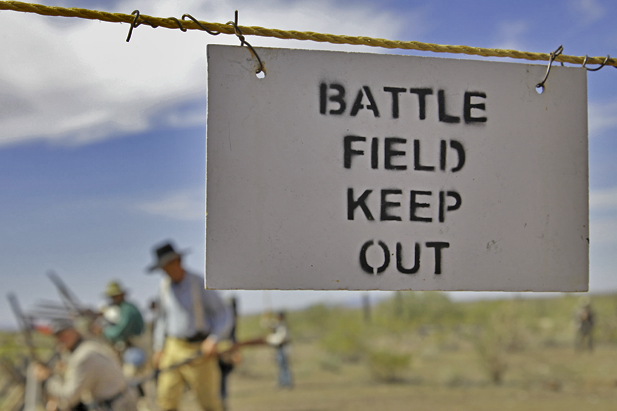