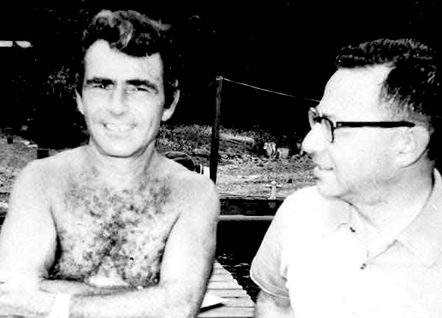 The BBC asked Mark Duggan in 2009 to interview Robert Serling, who lived in Tucson. The occasion was the 50th anniversary of the first Twilight Zone episode. Robert shared many memories of his brother Rod and talked about his successful career as a journalist and author.

Tucson, Ariz. – Robert and Rodman Serling grew up in Binghamton, N.Y., in a simple world of King Kong and baseball and carousels in the park. 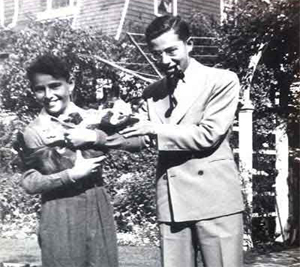 Life became more complicated for Rod after he served in WW II. According to Robert, his younger brother returned from duty a changed man.

He knows his brother saw things in the war that forever affected him, that he was reluctant to talk about, even with family.

Rod Serling could only deal with them by being intensely imaginative and creative.

Listen to Robert Serling’s remembrance of his brother Rod Serling:

He parlayed those traits into a job writing scripts for CBS in the mid-1950s. Soon, he was writing for prime time shows and making a name for himself with his inventive plots.

That creativity led to his being given a weekly TV series, which he called The Twilight Zone.

The first episode aired on October 2, 1959. It was an immediate success.

The Twilight Zone explored, in dramatized fashion, a world where anything was possible, particularly the bizarre and unexplained.

While Rod Serling was successful with The Twilight Zone, his brother was also making a name for himself.

“We were rank sentimentalists and rank romanticists, both of us.”
–Robert Serling

Robert was an aviation expert. He was United Press International’s aviation editor and wrote fiction and non-fiction books about air travel. Several sold reasonably well in the 1970s. The President’s Plane Is Missing became a made-for-TV film in 1973.

The Serling brothers collaborated only once on a script for the 1961 Twilight Zone episode The Odyssey Of Flight 33. Robert described watching Rod stare at an airline brochure for a while, then ask what he thought of the idea of an airliner suddenly traveling back in time mid-flight.

Another plot for The Twilight Zone!

The brothers remained close as adults and often got together to watch their favorite movie, King Kong. And every time Kong is killed, the two men sobbed like babies.

“We were rank sentimentalists and rank romanticists, both of us,” Robert Serling told me with a hearty laugh.

Rod Serling died on June 28, 1975, in Rochester, New York, after complications developed during open-heart surgery. He was 50 years old.

His brother Robert Serling died of natural causes in 2010. He was 92.

Listen to our remembrance of Robert Serling: 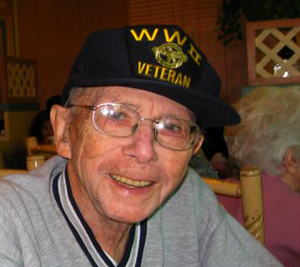