Scientists driving bark beetles crazy with their own sounds 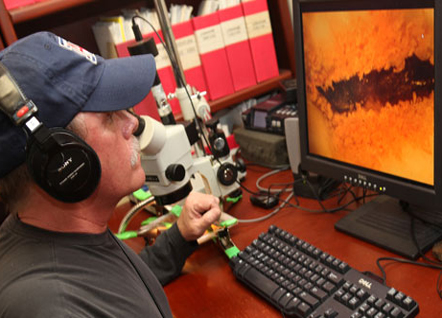 The insect, slightly larger than a piece of rice, has killed millions of ponderosa and piñon pine trees from the Canadian Rockies to the Mexican Sierra Madre. They spread quickly, infecting entire mountain slopes in just months.

Attempts to eradicate the beetle have been unsuccessful. But Hofstetter, a professor at Northern Arizona University’s forestry school, is trying a new approach. 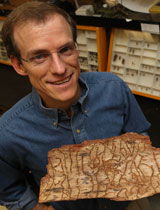 He and research assistant Reagan McGuire recorded the sounds the beetles make. They placed a microphone and a speaker in an artificial beetle habitat of wood bark and watched what happened. 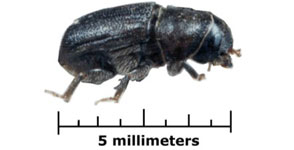 They started by creating a catalog of beetle calls. But soon, McGuire blasted music and other sounds at them to see their reaction.

The bugs ignored human speech. They didn’t care about Guns & Roses, either.

But they couldn’t stand the sound of their voices. Especially after McGuire manipulated and amplified the recordings. The insects attacked the glass of their artificial habitat. Then they turned on each other, sometimes right after mating. 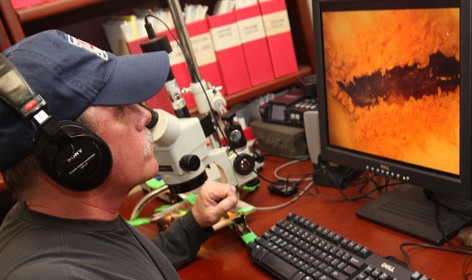 Reagan McGuire worked with the sounds of bark beetles in the lab. (Photo courtesy of Northern Arizona University.)

According to Hofstetter, that’s not typical bark beetle behavior.

He and McGuire wondered if they’d found a new way of controlling them.

They repeated the experiment outdoors with some success, but they’re working on practical ways to test a forest full of infected trees.

The call of the bark beetle is creepy enough to be used in a horror film. (They Crawled From the Trees?)

But the horror of their destruction could be halted if the researchers are successful.

A remixed bark beetle mash-up, cranked up to “11,” could save millions of trees in the Western U.S.

NAU article on “Beating The Beetles.”

More on field studies by Hofstetter and McGuire, using bark beetle sounds in a forest.