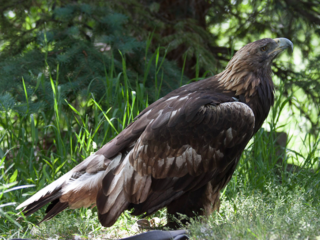 One of the oldest captive golden eagles in the world, well-known to visitors at the Aspen Center for Environmental Studies, passed away in mid-May, apparently of a sudden illness.

I spoke with ACES’ Naturalist Director Jim Kravitz, the bird’s handler for many years, about working with her.

Hikers found her injured near Aspen in 1982; she was later treated for a broken wing and leg by raptor rehabilitation experts in Fort Collins.

Her injuries prevented her from being returned to the wild, and in keeping with raptors held in captivity, she was never officially given a name. She’d lived at the center’s Hallam Lake facility since the early 1980s and became one of their longest-serving environmental educators.

Kravitz estimates that the bird was seen by nearly 10,000 people a year for more than 30 years.