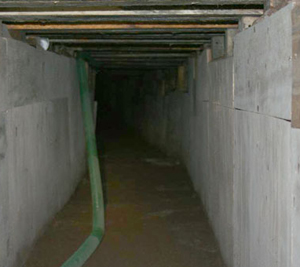 In 2009, I interviewed a U.S. Border Patrol “Tunnel Rats” team for the British Broadcasting Corporation. I also accompanied them on patrol in several underground passageways. The story aired on the BBC World Service program Outlook. The original link on their website is no longer active.

Nogales, Ariz. – The DeConcini Port Of Entry is busy, but only part of the activity happens above ground.

Underneath the city lies a network of tunnels. Some are meant to drain rainwater, but others are used for smuggling. They’re dug quickly, sometimes have ventilation and electricity, and are very dangerous.

Smugglers enter tunnels on the Mexican side, cross the international border through the narrow passageways, and emerge on the U.S. side. They exit in houses, abandoned buildings, and even from utility hole covers in busy parking lots. 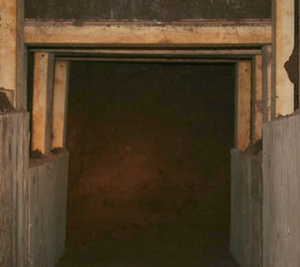 This smuggling tunnel underneath Nogales, Arizona, had support beams. Some have ventilation and electric lights. (Photo courtesy of U.S. Border Patrol)

They now have a patrol team, known as the Tunnel Rats, and spend hours crawling through wet, narrow passages.

The team starts at two large underground drainage systems between Nogales Ariz. and Nogales, Mexico. Their searches often lead to discovering smaller, illicit tunnels, bored through concrete and meant to deliver desperate humans instead of water.

That’s when the night vision goggles come in particularly handy.

Agent Michael Scioli met me at the Border Patrol’s large facility just outside of town, where we talked for a while in a comfortable, air-conditioned room. He told me the illegal shafts they’ve discovered have grown increasingly elaborate. Some have ventilation and electric lighting, while others are barely wide enough to crawl through a flashlight in your teeth.

It’s not a place for the claustrophobic.