“The kinds of things he believed, he tried to live…” 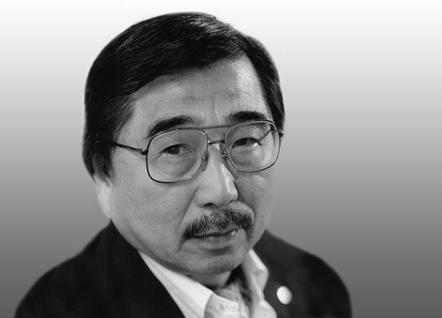 From 1939 to 1973, it was the Catalina Federal Honor Camp. The inmates who built the Catalina Highway up Mount Lemmon were the original occupants. Conscientious objectors were also housed there during WW II.

Today, all that remains of the camp is a small collection of stone steps and foundations losing a battle with weeds and the weather. A forest service campground is nearby. 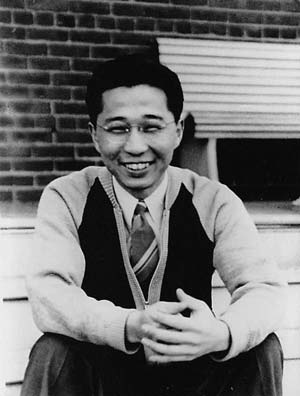 Heidi Schewel, the spokeswoman for the Coronado National Forest, recalled that many people felt Prison Camp was an inappropriate name for a recreation site. A suggestion was made to rename it after Gordon Hirabayashi, the camp’s most well-known occupant, and erect a small display explaining his significance.

“They wanted to honor Dr. Hirabayashi for his efforts in bringing to people’s attention what had been an injustice that was done to a lot of people,” said Schewel.

Gordon Hirabayashi served a three-month sentence at the camp in 1945 after defying the federal government’s order that young Japanese American men sign oaths of loyalty to the U.S. and register for military service. He also ignored curfew orders.

When Japan bombed Pearl Harbor in 1941, he was a student at the University of Washington.

“Because it was only asked of Japanese Americans, it had a racial component to it,” Leong noted. “He said, ‘you’re not asking any other American young men of draft age to fill out a loyalty oath. Why are you asking Japanese Americans to do this?’”

He also refused to cooperate when the U.S. government ordered Japanese Americans in the western U.S. to go to so-called ‘relocation’ centers. That often led to their incarceration in massive prison camps, usually in remote locations in Colorado, Arizona, Utah, and other Western states. From 1942 to 1946, more than 100,000 Japanese Americans and Japanese immigrants were held in such camps.

Gordon Hirabayashi objected to being treated differently than other U.S. citizens. That made him a criminal in the paranoid wake of the bombing of Pearl Harbor. He was prosecuted for defying a curfew. His case went all the way to the U.S. Supreme Court, where he lost. 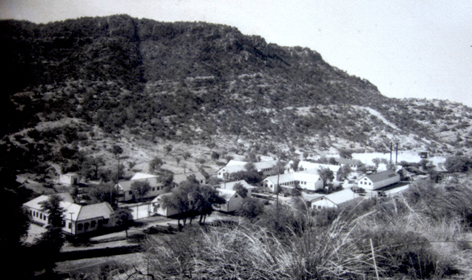 The Catalina Federal Prison Camp in the 1940s. The prisoners were not contained by walls or fences. But it was still a prison. They spent their days doing hard labor, such as breaking rocks and building stone walls. (Photo courtesy of Coronado National Forest)

At her lectures on Japanese incarceration, Leong tells of what happened when Hirabayashi arrived at the minimum-security camp to begin serving his sentence. Officials couldn’t find his papers, so he was told to go home.

They instructed him to return to Tucson, grab a bite to eat, and come back later. After a meal in town, Gordon Hirabayashi threw himself at them and insisted they put him in jail.

He served a short sentence and returned to the Seattle area after the war ended. But his legal struggles continued as he fought to clear his name. His fight also helped keep Japanese incarceration from becoming a forgotten part of history.

Hirabayashi stood up for his rights based on moral beliefs. He was a religious pacifist in the Quaker tradition. When his nephew, Lane Ryo Hirabayashi, saw his uncle’s wartime diaries, he was surprised by the depth of his conviction. Lane and his father helped Gordon write the 2013 book A Principled Stand: The Story of Hirabayashi v. the United States.

“Gordon did not wear his spirituality on his sleeve,” Lane Hirabayashi explained.

“It was a revelation to me when I began working with my dad through Gordon’s diaries from ’42 and ’43 and his personal correspondence; he was a deeply religious person. Because Gordon did not preach. The kinds of things he believed, he tried to live them.”

The word internment legally refers to the wartime confinement of enemy aliens. Not American citizens.

But after the bombing of Pearl Harbor, many people believed Japanese Americans could not be loyal to the U.S. On February 19, 1942, President Franklin D. Roosevelt signed Executive Order 9066 authorizing West Coast Japanese Americans’ forced relocation to hastily-built camps.

The order was only for those in the so-called ‘exclusion zone’ of the West Coast states. So a U.S. citizen of Japanese ancestry who lived in Seattle was sent to a prison camp. His brother in Milwaukee was spared.

“Neither the Army nor the War Relocation Authority relished the idea of taking men, women, and children from their homes, their shops, and their farms. So, the military and civilian agencies alike determined to do the job as a democracy should with real consideration for the people involved. We are setting a standard for the rest of the world in the treatment of people who may have loyalties to an enemy nation. We are protecting ourselves without violating the principles of Christian decency.” –United States Office of War propaganda film, 1943

According to Karen Leong of ASU, the U.S. has always dispossessed and re-located people.

But remembering such treatment is a way to avoid repeating the past, she added, “so that we’re aware of the ways in which we can allow fear and the sense of need to secure our boundaries to undermine the very thing we treasure, which is our democracy.”

Gordon Hirabayashi eventually earned a doctorate in sociology and taught at several universities. He also continued to speak out about the unjust treatment of Japanese Americans in World War II. And in 1999, he returned to the prison camp near Tucson. This time it was to be present when the Forest Service renamed it in his honor.

“We had a dedication ceremony,” remembered Heidi Schewel. “Dr. Hirabayashi came down, along with some of his family and some of the other conscientious objectors who’d been living at the site. It brought some recognition to (him) and the work that he’d done.”

It was a fitting tribute to a man who had fought to clear his name for years after the war.

He finally won. The original 1942 conviction for defying a curfew was overturned in 1987.

Karen Leong pointed out that Gordon Hirabayashi never stopped speaking out about the U.S. government’s World War II policy of treating one group of Americans as enemies of the state.

“That’s remarkable that he continued to fight for affirmation of the Constitution’s protections of its citizens.”

Gordon Hirabayashi died on January 2, 2012. Later that year, he was posthumously awarded the Presidential Medal of Freedom, the nation’s highest civilian honor. 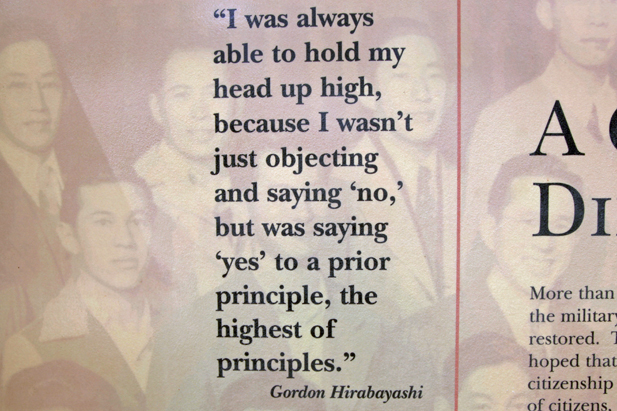