Tom Russell and the vanishing poetry of The Old, Weird America 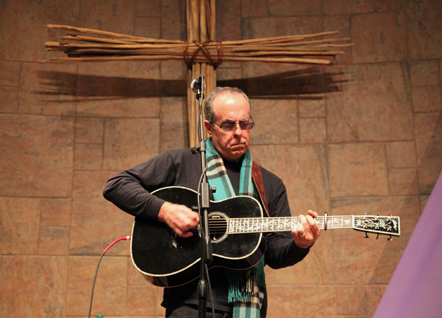 Listen to my interview with Tom Russell. I opened by asking, “what’s on your radar these days as a storyteller?”

A bad cell phone connection stymied my first attempt at interviewing Tom Russell. He was driving around the edge of Ft. Worth, trying to find his hotel. The signal was so bad that we agreed to wait until he’d checked in. 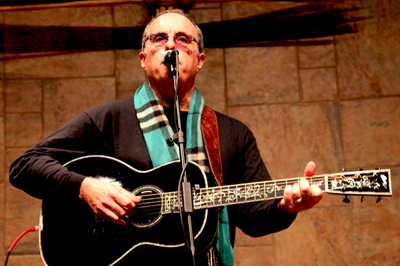 My second attempt to interview Tom Russell came fifteen minutes later. He was in his room, but the connection was even worse.

So much for landlines.

We still managed to have a short conversation, mostly about his influences and his use of history and landscape as songwriting subjects.

At one point, through the buzzing and crackling on the line, Russell mentioned a somewhat arcane notion, rarely spoken of in modern music: The Old, Weird America.

The term comes from writer Greil Marcus, who described it as a “playground of God, Satan, tricksters, Puritans, confidence men, Illuminati, braggarts, preachers, anonymous poets of all stripes.”

For Tom Russell, that’s a rich songwriting well from which to draw. He’s returned to it again and again, casting his songs with outlaw heroes, poet drifters, and ordinary people.

The third time I interviewed Tom Russell, phone lines weren’t an issue. It was during the intermission at one of his shows at a Unitarian church in Sahuarita, Ariz.

While the audience nibbled pastry and sipped decaf in the room next door, Russell talked at length about his songwriting fuel.

It’s “The Old, Weird America.” Or at least a modern remnant.

To Russell, his lyrical style is part of a tradition that includes Dylan, Dave Van Ronk, Ramblin’ Jack Elliott, Bukowski, and Kerouac.

But his most significant influence is Ian Tyson, originally part of the 1960s Canadian folk duo Ian & Sylvia, but with a long and storied career as a solo troubadour. 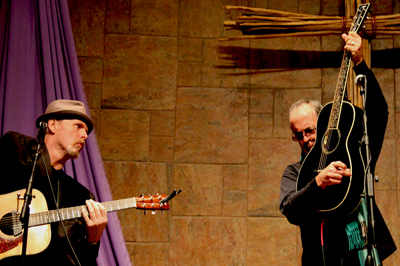 A student of history, Russell is fascinated with the Desert Southwest, particularly the lands of La Frontera along the U.S.-Mexico border.

The California native now lives in El Paso. The border region, its troubles, and its rich cultural history all loom large in his music.

His personal history is almost worthy of a song itself.

Tom Russell was born in Los Angeles and earned a master’s degree in criminology from the University of California. That led to a teaching gig in Nigeria when that country was at war.

He passed through Norway, Spain, and Puerto Rico, before landing in Vancouver in the early 1970s. That’s where he first began performing in public.

Next, it was Texas, to form a band with singer Patricia Hardin. They moved to San Francisco and put out a few albums before breaking up in 1979.

Russell left the music business for a bit, but he was still writing songs.

One of them, Gallo Del Cielo, a vivid ‘long-tale’ about a champion fighting cock, led to his big break. Working as a cabbie in Queens, he had Grateful Dead lyricist Robert Hunter as a passenger one night.

Recognizing his fare, Russell sang him the song. Hunter was so impressed he invited Russell to be his opening act for his music and poetry performances.

Since then, Russell has released more than 20 albums, several DVDs, and a book. He’s toured extensively and found particular success in Europe.

Today, he writes for a Western-themed magazine, paints, and releases a new album every few years. Dylan, Ramblin’ Jack, and Kerouac are never far away. General Jack Pershing and Pancho Villa still ride through his imagination.

Together, they create Tom Russell’s own unique American Mythology. And it is as unified and vital as his influences.