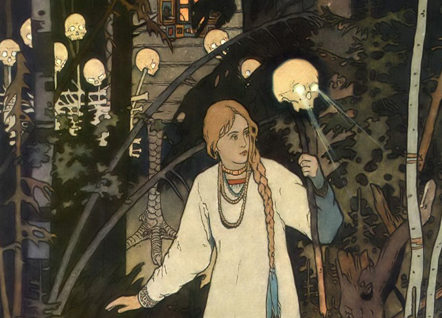 Alison Hawthorne Deming has loved the story of Vasilisa since she was a child.

Even though the nasty witch Baba Yaga gets the most attention, she identifies with the heroine.

Deming writes: “I’ve always been inspired by this marvelous little girl Vasilisa, who is smart and curious and fearless in the face of evil and death.” 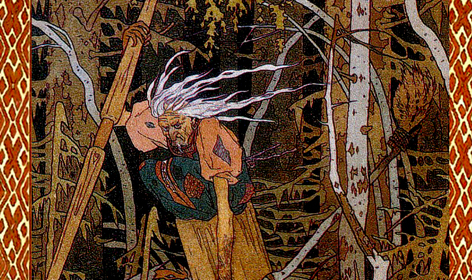 Baba Yaga in her mortar, illustrated by Ivan Bilibin, 1902

The evil is Baba Yaga, a fearsome presence in Eastern European folklore.

Her grotesque form is usually seen flying in a mortar, wielding a pestle, and guarding a house that sits on chicken legs.

Baba Yaga challenges travelers in the deep forest in most accounts, often threatening to eat them.

Few know that she will help them if they are courageous.

Slavic mythology imbues Baba Yaga with a powerful maternal archetype, and some see her as a symbol of The Forest Mother.

In the Russian folktale, known alternately as Vasilisa the Brave and Vasilisa the Beautiful, the visitor is courageous, determined, and blessed.

Vasilisa, mistreated by her sisters, is sent into a gloomy forest to fetch light from Baba Yaga, described here by Deming:

“She was as ugly as a misshapen gourd. And she lived in a house made of bones surrounded by a creaking picket fence built with the skulls of her victims. The eye sockets lit up at night with a fire of an unknown source.”

To earn light from Baba Yaga, Vasilisa must perform several “impossible tasks,” which she completes to the witch’s great surprise.

Vasilisa the Brave follows the mythological Hero/Heroine’s Journey sequence of descent, tribulation, and transformation. In this story, a young peasant girl makes the journey. 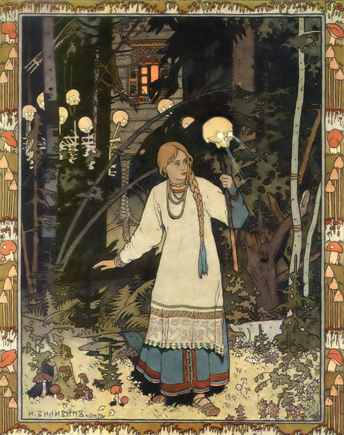 Ivan Bilibin’s illustration of Vasilisa The Beautiful, lighting the darkness outside of Baba Yaga’s chicken-legged hut.

Deming also writes: “Vasilisa may well represent our capacity to integrate old ways of understanding the world with courageous new ways of surviving.”

The version of Vasilisa the Beautiful that Deming reads from is adapted from an extended essay, Baba Yaga, Demeter, and the Drunken Mother: Myth, Metaphor, and Science at the End of the World presented at the University of Arizona Poetry Center in 2012.

About Alison Hawthorne Deming: A poet, essayist, and Professor of Creative Writing at the University of Arizona, Deming is widely published. A Vermont College graduate, she’s received many awards and fellowships, including two from the National Endowment for the Arts. She’s edited numerous literary anthologies and is the former director of the UA Poetry Center.