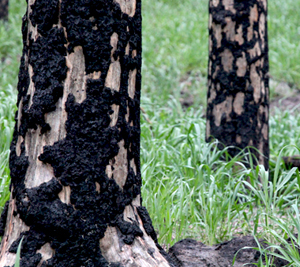 Coronado National Forest, Ariz. – Forest Service road 42 travels over the crest of the Chiricahua Mountains, one of southeast Arizona’s many Islands In the Sky.

The road starts in desert lowlands and quickly ascends to almost 9,000 feet above sea level before dropping 3,500 feet.

It also travels through the heart of the burn area for 2011’s Horseshoe Two Fire. The human-caused blaze burned 223,000 acres of the Chiricahuas and came close to the small towns of Portal and Paradise. 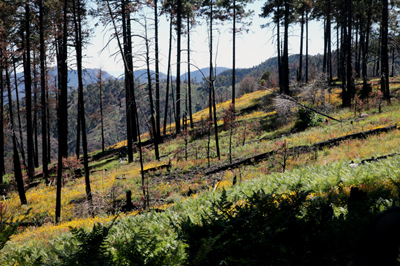 A burned slope at 8,500 feet, near the crest of the Chiricahua Mountains, explodes with a carpet of new growth. But not all of it is native or beneficial.
(Photo by Mark Duggan)

According to Coronado National Forest Ranger Bill Edwards, the Horseshoe Two caused only a few injuries, a rarity among fires of such magnitude.

“The vast majority of the primary Chiricahuas did burn,” said Richards. “Anything north of Rucker Canyon was involved in the fire.”

It didn’t take long for new growth to appear among the scorched landscape. Flowers and grasses burst forth, asserting their colorful dominance around blackened tree stumps.

The riot of new flora provided much-needed forage for wildlife. According to Edwards, many species returned to the burn area soon after the smoldering ended.

The Horseshoe Two wasn’t the only Arizona wildfire that made news in 2011. The Monument Fire burned more than 30,000 acres and forced evacuations near Sierra Vista. Another fire burned in the mountains northeast of Nogales.

But the one that captured the most attention was The Wallow Fire.

The Wallow was the largest wildfire in Arizona history, burning 538,000 acres, 32 residences, and numerous campgrounds. 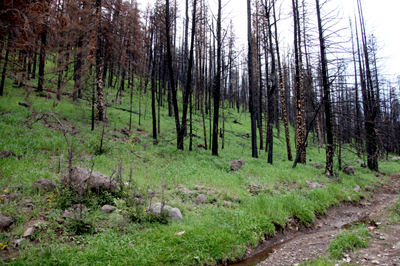 New growth on a slope in the Wallow Fire burn area of Apache Sitgreaves National Forest. Runoff from monsoon rains helped spur new growth and contributed to erosion at the base of the slope.
(Photo by Mark Duggan)

The fire burned through large areas of deep, dense, high-elevation timber. Several firefighters were injured, and the towns of Alpine, Eager, and Greer were almost evacuated.

By the time it was contained, seven weeks after ignition, The Wallow Fire had cost $109 million to fight, the most expensive in state history.

Another danger lurks in the burn area: Erosion.

Denuded mountain slopes can’t sustain heavy rains and can collapse in waves of mud and rock.

“Many of these watersheds still are fairly unstable because of loss of vegetation,” Bill Richards told me in 2011.

But like the Chiricahuas, many hillsides in the Wallow burn area filled in with lush, new growth just weeks after the fire.

The grasses and flowers come first. Life is gradually returning to, well, not normal.

In a 2011 interview, he told me a fire like the Wallow would forever alter the flow patterns of watersheds in the Apache-Sitgreaves National Forest. 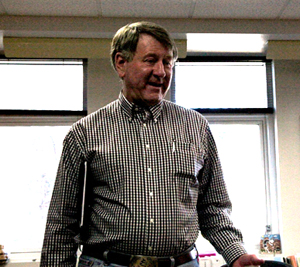 Wildfires release nitrogen into the air and ground. Covington pointed to studies of prescribed burns in areas where fuel such as pine needles and wood accumulate on the forest floor.

“A burn can release the equivalent of about 200 pounds of nitrogen per fertilizer equivalent per acre, which is a real fertilizer pulse,” he explained.

“That’s why, post-fire, a lot of the vegetation is so green and lush. It’s why wildlife comes in. They’re looking for high-protein, high-quality forage.”