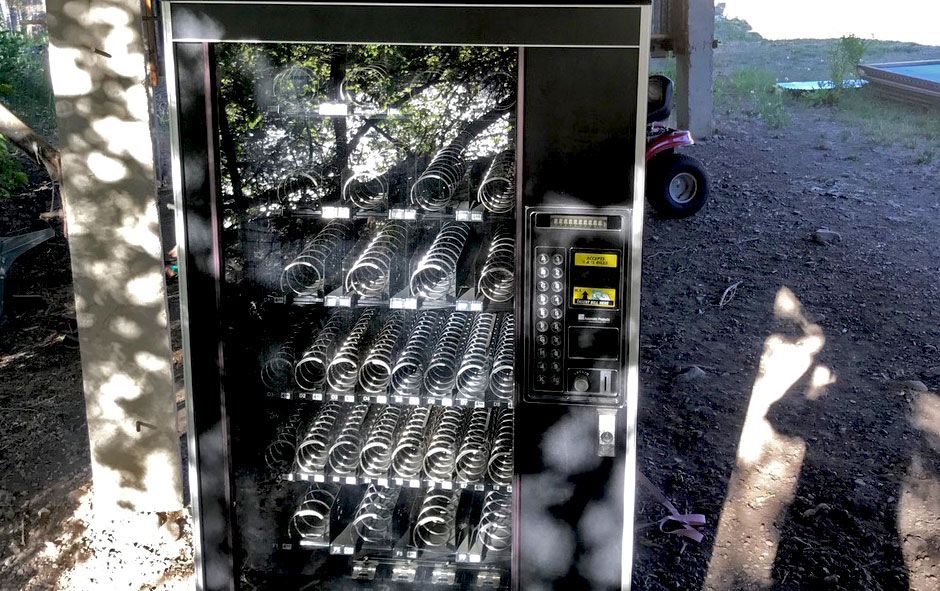 Artists find themselves in a unique position during the coronavirus pandemic. Galleries and museums have been shuttered for months, cutting off a large part of the art market. But staying home has also led to a creative outpouring for many artists. People are looking for ways to channel their anxiety and other emotions. Mancos-based blacksmith Alex Bond came up with a way to get small pieces into the hands of art lovers using vending machines.

The idea for bringing art vending machines to the Four Corners came to Alex Bond in Las Vegas. The Mancos, Colorado-based blacksmith saw them on a trip last winter. He reasoned they could work there in rural southwest Colorado.

At the time, Bond had been thinking a lot about the relationship between the artist and the market. A Durango gallery had declined to show his work, leaving him feeling defeated. The vending machines could let artists like him bypass the traditional art market. They could sell their work directly to customers.

The idea became urgent as the coronavirus pandemic shuttered galleries, museums, and studios. The art market, like everything else, was on hold.

“When COVID hit, the art gallery that I eventually became a member at, the Artisan’s Cooperative in Mancos, closed,” Bond explains. “Not only myself but about 12 other artists there were out of work. So we were looking for a way to sell art with measures of social distancing and where we didn’t all have to gather in one place.”

He knew it was time to try the vending machine concept. As a board member of the Mancos Creative District, he also knew he could get help making it happen.

Bond found a couple of retired machines in Flagstaff, Arizona. Once he got them back to Mancos, he set about, as he says, “learning way more than I ever thought I would about how to use vending machines.”

They work like any vending machine but dispense small paintings and jewelry instead of chips and gum. Pieces are “loaded” onto the familiar wire spirals visible through the glass. Customers choose a piece, add money, enter a corresponding number, and retrieve their purchase from the dispenser tray.

Bond says the vending machine concept bypasses the traditional gallery model. Any artist is welcome to display and sell their work. And art is available anytime.

“The 5 a.m. dog walker could stop by and grab a bracelet for their friend’s birthday without anybody needing to staff it,” says Bond. “And it could also be something that… didn’t have the same level of prestige as an art gallery. Where anybody could give it a shot to sell some art.”

Bond believes the vending machines will help create a new art market in southwest Colorado. The first two debuted recently in Mancos, about a half-hour west of Durango. He wants to see them pop up in other towns, too. He feels many artists could use a new way to sell their work. Especially now.

The coronavirus is leading to an artistic explosion. It’s not unusual. Past pandemics have been followed by periods of artistic expansion. Deadly viral outbreaks, it seems, provoke an emotional rawness that leads to bursts of creativity. Bond agrees that COVID-19 has led to a similar outpouring of expression.